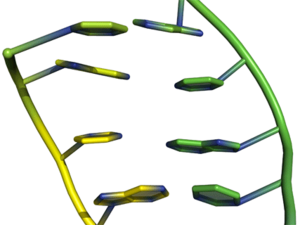 Stacking is the hydrophobic interaction between the flat surfaces of adjacent bases. It makes a significant contribution to the stability of a nucleic acid in solution.

Nucleic acid bases are flat and vaguely coin-shaped. The edges can form strong interactions with water and other bases through hydrogen bonding, but the large top and bottom surfaces of the base cannot. These surfaces interact with water in a manner similar to oil. The same forces that cause droplets of oil to merge in water cause the hydrophobic surfaces of bases to clump together into stacks.

==The nature of stacking interactions==

All nucleobases have an aromatic ring. The difference with benzene, is that all 6 atoms are carbons, while in pyrimidines, atoms 1 and 3 are nitrogen. Still, a large number of physics rules apply, like for instance, stacking.

The factors that make this parallel displaced formation a stable one go far beyond the scope of this wiki (if you really want to know more about it, just Google "pi stacking" or "pi electron"). Suffice to say that for proper stacking in RNA, the bases involved need to be as parallel as possible, and the displacement between the center of mass of the rings should stay around a specific value. The more the geometry deviates from these ideal distances and angles, the weaker the interaction becomes.

Now, we know that bases form base pairs. So, spatially

So, assuming that this distance keeps being the same between all pairs, this is what happens.

And this is the origin of the helix.

This works well with Watson-Crick canonical base pairs like GC and AU. But any other pair will have a different geometry, which will at least destabilize the cascading stacking interactions, and in more extreme cases, break the stacks, or even open what we know as loops.

As mentioned above, it sometimes (quite rarely) happens that bases will adopt a T-shaped stacking conformation.