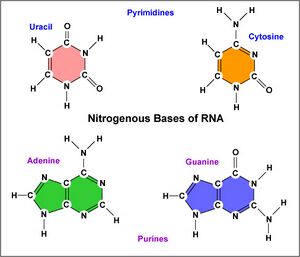 Nucleobases, or simply bases are components of nucleotides, which in turn are the building blocks of RNA and DNA. The four bases commonly encountered in RNA are adenine, guanine, cytosine, and uracil. Bases are sometimes called nitrogenous bases to emphasize the presence of nitrogen in this part of the RNA molecule. A base differs from a nucleotide in its lack of ribose and phosphate, and the compound consisting of a base and a ribose is called a nucleoside.

Bases interact with one another by hydrogen bonding and stacking. These interactions help stabilize folded RNA structures. In EteRNA, three types of base pairs are encountered: AU Pairs, GC Pairs, and GU Pairs.

Bases can exist in different structural isomers known as tautomers. In each case, one tautomer is heavily favored over others. The ability to shift between tautomeric forms is important in the formation of certain noncanonical base pairs and contributes mutation during replication of RNA and DNA.