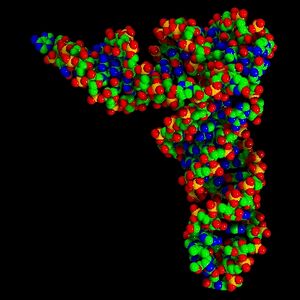 Ribonucleic acid, or RNA, is molecule present in all living organisms. Like DNA, RNA consists of a chain of simple building blocks called nucleotides. The chemical properties of RNA allow this chain to fold back on itself, creating a diverse array of stable structures.

RNA, like DNA, is composed of nucleotides. Each nucleotide consists of a sugar joined to a phosphate group and a base. RNA differs from DNA in the identity of the sugar and one of the four bases. The sugar ribose present in RNA, while DNA contains the closely related sugar deoxyribose. Additionally, RNA incorporates the base uracil, while DNA makes use of its close relative, thymine.

Nucleotides are connected by bonds between the phosphate group and sugar. In most RNAs, each nucleotide is connected to others at only two places - the 5' and 3' ("five-prime" and "three prime") positions of the sugar. As a result, every linear chain of nucleotides has two distinct ends - one where the 3' position is unbound, and another where the 5' position of the sugar is free.