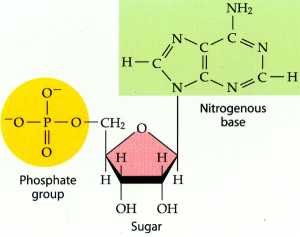 Nucleotides (NT's) are the building block from which RNA and DNA are constructed. Each nucleotide consists of a nitrogen-containing base, a sugar, and a phosphate group. Nucleotides are connected by bonds between the phosphate group and sugar. The four most common bases in RNA are adenine (A), guanine (G), cytosine (C), and uracil (U). When the base is bound to ribose, a nucleoside is created. The addition of a phosphate group to a nucleoside creates a a nucleotide. Other bases modified bases such as xanthine, hypoxanthine, and 5,6 dihydrouracil are present in certain RNAs.

In addition to their role in RNA and DNA, nucleotides also serve as energy-storage molecules, enzyme cofactors, and signaling molecules.