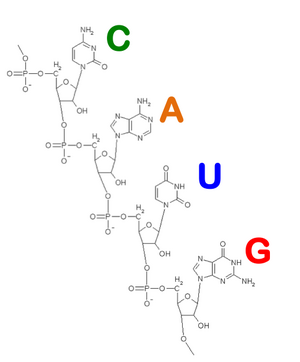 Why is RNA important ?

RNA is often called the "Dark Matter of Biology." While originally thought to be an unstable cousin of DNA, recent discoveries have shown that RNA can do amazing things. They play key roles in the fundamental processes of life and disease, from protein synthesis and HIV replication, to cellular control. However, the full biological and medical implications of these discoveries is still being worked out.

What's RNA made of?

RNA is made of four nucleotides (A, C, G and U, which stand for adenine, cytosine, guanine, and uracil). Chemically, each of these building blocks is made of atoms of carbon, oxygen, nitrogen, phosphorus, and hydrogen. When you design RNAs with Eterna, you're really creating a chain of these nucleotides.

How does RNA fold?

The most basic rules for folding RNA are similar to the famous rules for the DNA double helix that were figured out by Watson and Crick. There is a natural tendency for A, to stick to U, and for C, to stick to G. So when an RNA is synthesized, it doesn't just appear as a straight chain. It typically doubles back on itself to form helices that allow bases to pair up. The Eterna project is trying to gain mastery over this folding phenomenon. It turns out that there are also other kinds of pairs (where A, sticks to G, for example) which can contribute to intricate 3D shapes and will be explored in the next generation of Eterna.

What do RNAs do?

Scientists do not yet understand all of RNA's roles, but we already know about a large collection of RNAs that are critical for life: (see the Thermus Thermophilus image representing following points)