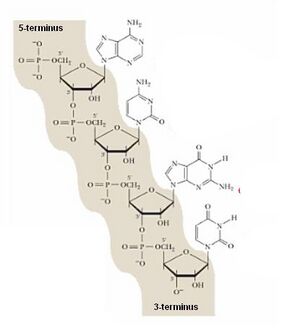 The backbone of RNA consists of the alternating sugar and phosphate groups that make up an RNA molecule. In the image at right, the backbone is highlighted. The RNA backbone is often represented as a ribbon, while the atoms and bonds of the bases are drawn completely.

The Significance of the Backbone in Eterna

The backbone has minimal significance for Eterna puzzles, where its only role is to "string together" the bases. That is, you can mutate any base that hasn't been "locked", but you can't actually move a given base to a different position in the puzzle.

In the lab, though, the situation is very different. The data we get back from the lab (the SHAPE data) comes from measuring the rate at which the SHAPE chemical (specifically 1-methyl-7-nitroisatoic anhydride, or 1M7) interacts with the backbone at each base position. The Nucleic Acid base itself (A, U, G or C) plays no role in the chemical reaction. So when we interpret the lab data, we are actually making inferences about the configuration of the backbone.

As a first approximation, the generally accepted explanation is that the rate at which the SHAPE chemical (or SHAPE probe, as it is often called) reacts at each base is an indication of how flexible the backbone is at that base. If the backbone is flexible enough, the thought goes, it can wiggle around to get into the right position to interact with the SHAPE probe; if the the backbone is being held rigidly, the SHAPE probe can not get access to the reaction site.  Furthermore, there is an assumption in this simplified theory that unpaired bases will have "flexiible" backbones, while paired bases will have "rigid" ones.

But any Eterna player who has looked at lab data critically knows that this can't be the whole story. Consider, for example, the SHAPE values for the closing base pair of a hairpin loop. It is quite common for the 3' base to be protected from the SHAPE probe (implying it is paired) while the 5' base is exposed to the SHAPE probe (impying it didn't pair). But pairing is a symmetric relation; A can't pair with B unless B pairs with A. 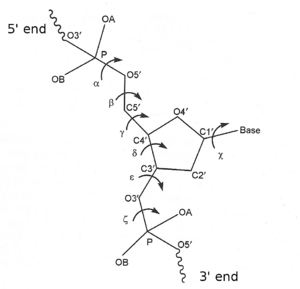 The main chain of the RNA backbone consists of repeating units of six atoms. Five of these, three carbons and two oxygens, come from the ribose sugar that gives ribonucleic acids their name.  The sixth atom is a phosphorus, which comes from the phosphate ion that links individual nucleic acids together into the long chains we know as RNA.

The backbone atoms are held together by covalent bonds, and fundamental chemistry constraints on covalent bonds keep the distances between adjacent atoms basically fixed. Similarly, the angle between the bonds at any atom are essentially fixed. The only thing that is not tightly constrained is the "twisting angle" of the bond between any two backbone atoms. Thus, to describe the configuration of any RNA backbone unit, it is sufficient to specify this "torsion" angle (sometimes referred to as a dihedral angle) for each bond. For this purpose, each bond is given a name. Starting at the 5' end of the chain, the bonds are named by the first six letters of the Greek aphabet: alpha, beta gamma, delta, epsilon and zeta. Specifying these six angles for each RNA unit completely specifies the three dimensional shape of the entire RNA molecule. 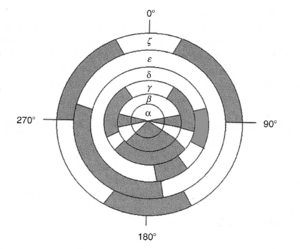 Historically, the basic units of the RNA backbone were considered to start with a 5' phosphorus atom and end with the last oxygen atom before the next phosphorus. This definition of the backbone comes naturally from the way that RNA is assembled in nature, from individual ribonucleic acids joined together with phosphate ions. The top image on the right illustrates this definition.

However, as scientists started studying the backbone, they found that that to systematically classify common patterns, it was more useful to consider the basic unit to be defined by consecutive pairs of ribose sugars, instead of consecutive pairs of phosphorus atoms. This actually makes a lot of sense from a mechanical point of view, since it is through the sugars, not the phosphorus atoms, that the forces that ultimately shape the backbone (the hydrogen bonds and stacking energies between bases) are transferred.

In 2008, scientists who had studied backbone configurations using a variity of different techniques joined in collaboration and published (RNA backbone: Consensus all-angle conformers and modular string nomenclature (an RNA Ontology Consortium contribution)). In this paper, they defined a new backbone unit, named the backbone suite, that runs from one sugar to the next, including the sugars on either end. Thus, a backbone suite is defined by seven, rather than six torsion angles. The second image on the right illustrates the definition of a suite.

This pair of images was created for "cross eye" viewing. To view it as a 3D image, look at the screen from a normal viewing distance and then slowly cross your eyes (as though you were trying to focus on a fly that was slowly moving from the screen toward your nose). When you start crossing your eyes, you should see four copies of the RNA molecule instead of two. As you cross more, the two middle images will get closer together. When the two images are right on top of each other, your brain should suddenly perceive them as one 3D image. Place your attention on that middle image and ignore the two on either side.