1M7 (1-methyl-7-nitroisatoic anhydride) is the chemical most often used in the Eterna lab SHAPE protocol to detect differences in configuration between the individual units of an RNA molecule's backbone. It has the potential to interact with one specific OH group of any backbone unit. The extent to which it actually interacts with each backbone unit yields information about the configuration of the atoms in that unit. 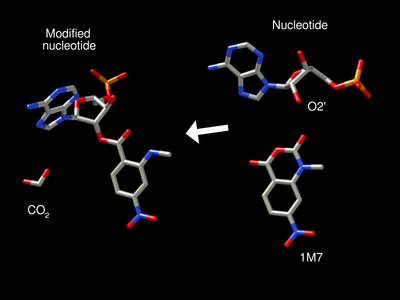 1M7 interacts with the RNA backbone.

The image on the right illustrates the interaction. Oxygen atoms are represented in red, and (most) hydrogen atoms are not shown. The label O2' on the right indicates the oxygen of the OH group that can interact with 1M7. The left side of the image shows the results if the reaction occurs.  A strong covalent bond now links the two parts. In the process, the upper hexagon of 1M7 is broken, and a molecule of carbon dioxide is released. The net effect is that in the next step of the lab procedure, where the RNA molecule undergoes reverse transcription into DNA, the reverse transcription stops when it comes to the modified base, resulting in a truncated DNA molecule.