== How does EteRNA map the data to the greyscales ? ==

The case : design Geenanen by Vinnie, in lab Thursday by DHammond 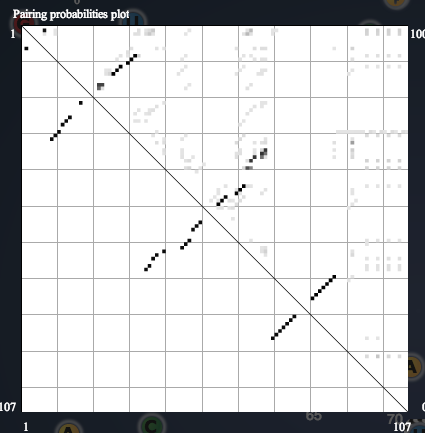 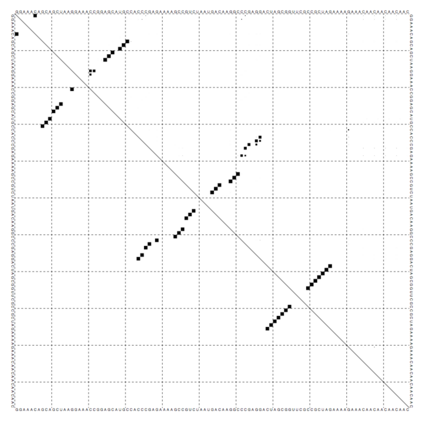 For the exact same sequence, the plot generated by ViennaRNA 1.8.5, which doesn't use greyscales, but rather matches probabilities with the surface of black squares. 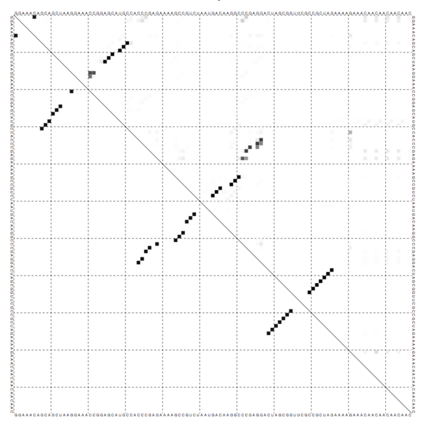 Same ViennaRNA 1.8.5 plot, but I edited the .ps file to map linearly probabilities between 0 to 1, with grey shades between pure white and pure black. This should have been very similar to the EteRNA plot... 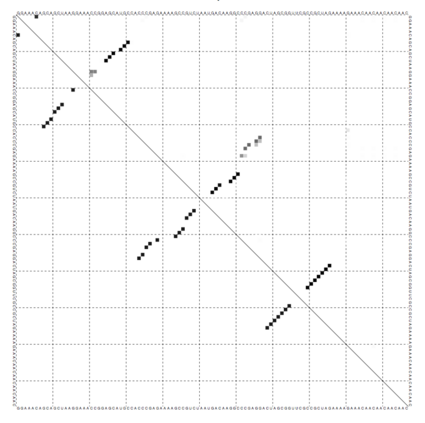 Finally, same as above, but I additionally squared the data back (since Vienna rootsquares the values for displaying surfaces, not shades)

So, I guess the question is : what am I doing wrong ?

PS: by the way, do you notice the +1 shift in both X- and Y-axis, between EteRNA and the ViennaRNA plots ? (for the record, I reported that bug months ago)

Update : I think I figured it out.

This is still the same ViennaRNA 1.8.5 output (left), but instead of (properly) correcting by squaring the values, probabilities are further exaggerated by root-squaring them again... I can see the advantage. Any possible misfolds and mispairings become very apparent, and players can easily see the progress (in that specific area) that they are making while mutating their designs. But there's clearly a drawback. Visually, it becomes nearly impossible to distinguish pairs with 90%+ probabilities from those with only 60%, meaning that players may think that their designs look clean and "solid" while there may actually be some weak pairs and stacks.

Edit: it occurs to me only now that this may not be a root-squaring. Possibly, the grey-scaling is just gamma-corrected (which happens to be close numerically to a root-squaring) for visualization comfort.

It would seem so. I'm vaguely hoping that someone from the staff will confirm this hyopthesis (it's still one, I don't have the source code of the application), and then, we could see in what form these (possibly important) details would be best presented on the page.

@Hoglahoo: I've just spent a little time on that idea you mentioned in #eterna. I think I just came up with something possibly cool.

This is a "mapping" of probabilities, left is 1.0 and right would be 0.0 (it's hard to make out, but 0 is pure black, anything >0 is already quite blue). The "rainbow" gradient is unbalanced to match the distortion caused by the double root-squaring applied to the data.

And this is what I get with the same plot

What I like with this treatment, is that one can see both the "uncleanliness" (the low probability blue dots), and the relative weakness of some of the targeted pairs and stacks (in pink).

I like the coloured plots you've done above, a fair number of my lab efforts have been trying to see if messy/clean dot plot is significant or not.

and then these two are also interesting- as there are only a few bases changed and both synthesised with a fairly similar dotplot and then very different scores.

It seems that RNAStructure produces colored plots, but I don't know on what exactly the coloring is based. I doubt it would work properly for switches though...

For ViennaRNA and/or EteRNA, the only way I know of until now, is to labor your way through, using various tools and hacks. Jee took note of the request at the last dev chat, maybe supporting/promoting the idea on the various public areas we have could make things go forward...

If you're in a hurry though, I can try to find some time to produce these myself. Want me to?