Cloud Lab is our new lab - with lots of labs. Basically cloud lab is just like regular lab. Just there is running more labs together at the same time. You get 3 design slots pr lab and 8 votes.

Cloud Lab is the pipeline in use at the Stanford Das Lab, essentially, 1000's of sequences can be tested at once. This includes designs made by EteRNA players, but also Das Lab peeps and also other labs. (Nando)

One thing is different though. The barcode. Which is this small hairpin attached to every lab, that is meant to help the tell all the designs apart. So each lab design shall have an unique hairpin. All these cloud labs are going to be part of the 1500 RNA’s that are going to be made at once in one batch. They tell the difference between the designs from the stem sequence of the barcode hairpin.

Or as Brourd said: Well, think of it this way, if you had to find a needle in a box of 1500 other needles, you would want it to be marked, wouldn't you? 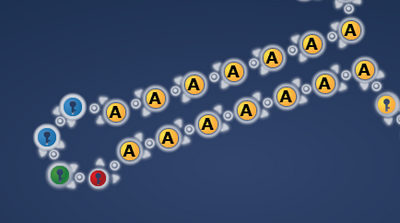 As Jee said: “The hairpin is 7 pairs long so it'll have 6^7 combinations. (279936) We should probably rule out all GUs and such, but I think there'll be plenty of slots. There's 3 per puzzle limit as usual. We'll remove them if there are too few submissions though.”

I noticed that altering the barcode, changed the designs energy and melt plot. We sometimes use energy and melt plot to tell us if a design is in a legal range. And this will make it harder for us to use the numbers to discriminate between designs. However melt plot seem to be more important in switch labs. The designs have a narrower legal range of temp difference and start and endpoint on the temperature scale. So I asked Jee if this was meant to be so. Here is his answer:

Hi Eli - we think the barcode is indeed an important part of the design, and should have equal impact on all the numbers as other parts of the RNA. It's true that the barcode will be pulled off from the RNA eventually, but it's still important to keep the barcode in a stable hairpin and prevent it from interacting with other parts of RNA.

What’s with the UUCG tetraloop on the barcode hairpin? Why is it the same?

What sequence should I choose for the barcode hairpin?

You should always choose a sequence that you think will solve the hairpin, as your design will depend on it forming correct. Try avoid using GU’s in it, as that will lower your chance for the hairpin forming correct, or at least don’t use more than one.

I can’t submit because someone already has my stem sequence, what should I do?

Try flip a pair or two, if that is not enough, add a GC-pair somewhere.

How will the slots get distributed?

Stevetclark: will players be limited to how many of their designs can be picked per lab or overall? Jeehyung: That'll depend on how many users submit vs how many we'll actually synthesize per puzzle. But the basic policy is to have the number of selected designs balanced among players

Devs added a news post explaining the barcode. Also see the dev chat from 23-1-2013 where a some details got added on the barcode.

By the way, there is one really fine thing about the barcode, besides that it allows the scientists to pull the RNA out of the haystack of RNA. That is that the neck area are now fully visible in the shapedata. One problem created, while two problems solved.

Now more details has been added into the game itself.