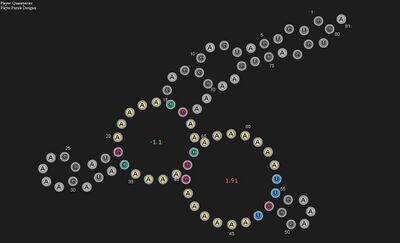 In the second example, a hidden instability is used to stabilize a tricky isolated base pair between nucleotides 41 and 64. If the 48-55 pair is GC, energy can be lowered by breaking the 41-64 pair. This trick works for two reasons. First, multiloops suffer an energy penalty when they contain AU or GU closing pairs. Second, the UU terminal mismatch is stabilizing when it occurs in an internal loop, but destabilizing when it occurs in a multiloop. The loop containing the 48-55 pair is technically an internal loop. Breaking the 48-55 pair turns it into a multiloop. Another use of this trick is described in the GetSat post on catalyst points.