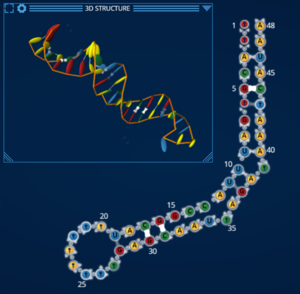 A snapshot of the Eterna3D interface.

Eterna3D is a feature that adds 3D RNA structures to certain puzzles. Additionally, players can add their own 3D stuctures to puzzles made in the Puzzle Maker.

The 3D window opens automatically and has three controls: Pan, rotate, and zoom. The 3D window can be resized, collapsed, and moved around the screen.

By default, clicking on the 3D window will pan the RNA structure; this default action can be changed between panning, rotating, and zooming using the settings (gear) icon on the 3D window. Additionally, there are some keyboard shortcuts that can be used to temporarily alter what clicking does: ctrl-click for rotating, shift-click for panning, and mouse wheel for zooming.

Players can create their own 3D puzzles within the Puzzle Maker. At the moment, players can upload any 3D structure to any 2D structure as long as both representations have the same number of bases.

Here is a procedure for creating 3D puzzles based on specific, real-life 3D structures. This procedure works best with "simple" structures - more complex structures may require additional preprocessing in a program such as Chimera.

Development of Eterna3D began in 2021. The feature was released in February 2022.